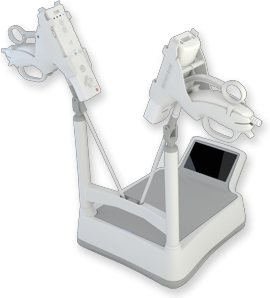 Although you can play Underground using the Wii U GamePad, actual motor skill training only takes place when using the custom made laparoscopic controller.

The laparoscopic controller’s two handsets each house a Wii Remote and a Wii Nunchuk. Each handset has a lance that is anchored to the playing field through a hinge joint. The playing field registers motion and rotation from each of the handsets using infrared light. This enables the player to control the game using motions identical to those performed during laparoscopic surgery.

Note for US customers: As of the beginning of 2019, Nintendo, the distributor of the game, has removed Underground from the US electronic Wii U store, as a preparation for discontinuing their Wii U platform. Nintendo will not allow Underground back onto their store. We have disabled the option to purchase the controller in this region.

What will you get?

What will you need in addition?